where World War II began Julien Bryan, an American documentary-film cameraman, entered Warsaw on September 7,1939, as Hitler’s armies were converging on the Polish capital. He was the only foreign cameraman in Warsaw during its 14-day siege. His pictures of the horror and devastation of the Nazi assault on the civilians of the city (published in LOOK, December 5, 1939) provided the world with a grim forecast of the destruction to come. 20 years later, Bryan returned to Warsaw with 100 pictures taken during his 1939 visit, searching for the people he had photographed as their city crumbled around them. In the LOOK magazine, published in September 1959, he tells the story of those he found – and the days when he and they witnessed the beginning of World War II.

HOW I FOUND THE PEOPLE I’D
PHOTOGRAPHED AFTER 20 YEARS

WHEN I interrupted my European vacation in September, 1939, to go to Poland, my only intention was to take a few behind the-lines photographs of a nation being invaded by the Nazis, and then leave. I arrived in Warsaw on September 7 to find that not only the Polish Government had fled the city, but all the foreign correspondents as well. For two weeks, I photographed the citizens of Warsaw as they fought with heroism but futility against a powerful enemy. It was a new kind of war in which civilians, not the military, were the prime targets.
Recently, I returned to Poland to make a documentary film for use in connection with my lectures. I decided to try to find the people I had photographed during those terrible two weeks, 20 years ago. I knew it would be a mammoth job. Hitler had wanted Poland to be an example of the invincibility of the Nazi war machine, and he had exacted a staggering death toll. For example, there were 3 1/2 million Jews in prewar Poland. Today, there are only about 50,000.

Nevertheless, I decided to give it a try. I took 100 prints of my 1939 pictures to the offices of the Evening Express, the largest evening newspaper in Poland, with a circulation of 500,000. The editors of the Express were enthusiastic about my search, and they agreed to help. But even under Poland’s Communist regime, the editors retained at least one capitalistic practice: They insisted on having an exclusive to the story!
I agreed, and the newspaper launched a big campaign, with a page of the 1939 pictures in each issue, and the words: „Do you recognize yourself, your relatives, your house and street? The Express is helping American photographer Julien Bryan to find the heroes of his film from besieged Warsaw in 1939.” Readers who recognized anything in my pictures were asked to come to the newspaper’s offices with that information. The pictures caused a sensation in Warsaw, and the circulation of the Express soared even higher.
One of the first to come forward was a young woman named Kazimiera Mika.

As I was driving along the edge of Warsaw in 1939, seven women, desperate for food, were digging for potatoes in a field nearby. Suddenly, two German planes appeared out of nowhere and dropped two bombs on a small home 200 yards away, killing the two women who were in it. The potato diggers dropped flat against the ground, hoping to be unnoticed. When the bombers left, the women returned to their digging. They had to have food.
But the Nazi fliers were not finished. In a few minutes, they returned, almost at ground level, and strafed the field, killing two of the women on the spot. As I was photographing the scene, a little 10-year-old girl ran up and stared transfixed at one of the bodies. It was her older sister. The child had never seen death before and couldn’t understand why her sister did not speak to her. „Please talk to me! What will become of me without you!” she wailed. I put my arm about her and tried to comfort her. She cried. So I did and so did the two Polish officers who were with me. What could we say to this child?
In the offices of the Express, that child, Kazimiera Mika, now 30, and I were reunited. I asked her if she remembered anything of that tragic day in the potato field. „I should,” she replied quietly. „It was the day I lost my sister, the day I first saw death, and the first time I met a foreigner – you.”
Today, Kazimiera is married to a Warsaw streetcar motorman. They have a 12-year-old girl and a boy, 9, and the family lives in a 1 1/2-room apartment, typical of the overcrowded conditions of war-racked Poland. She is a charwoman at a medical school (she told me her biggest regret is that her education ended when the war began), and all of the $75 earned each month by her husband and herself goes for food.
Kazimiera and her husband, like most Poles, supplement their income with odd jobs, and are sometimes forced to sell a piece of furniture for extra money. But they celebrated my visit to their home with that rare treat, a dinner with meat. 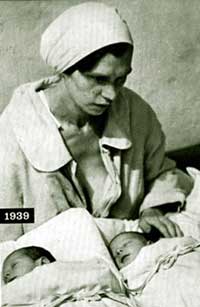 FAMILY WIPED OUT
In a raid on a maternity hospital, Mrs. Balbina Szymanska, mother of twins, sought refuge in the basement (right). Now remarried (below), she told me the twins were killed, with their father, during anti-Nazi revolt on September 5, 1944. It was their fifth birthday. 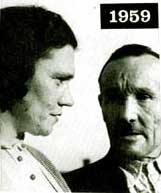 During one air raid in those tragic two weeks of the siege, I took shelter in a maternity hospital. Huddled on the cold stone floors of the basement were 50 mothers with their infants. Some of the mothers bore shrapnel wounds received when the hospital was

shelled by the Nazi guns ringing Warsaw. It was there that I photographed a young mother with her twin boys. That mother, Mrs. Balbina Szymanska, came to the Express offices to meet me. She said that the boys and their father had been killed during the 1944 revolt, when the Poles, at the bidding of Radio Moscow, rose against their German conquerors. The Red Army failed to come to the aid of the Poles, and the Nazis crushed them ruthlessly. During Mrs. Szymanska’s absence from home, on September 5, 1944, a shell blasted their house, killing the twins and their father. It was the boys’ fifth birthday. She has remarried and now has three children by her second husband. 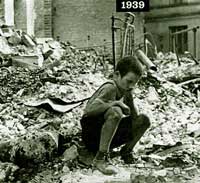 A BOY’S WEARINESS
Ryszard Pajewski was a study in dejection when I saw him sitting on a pile of rubble (below). Only nine, he had suddenly been made the family breadwinner – and there was no bread to be had. Now a truck driver, he remembers that when he saw me last, I was carrying two „boxes”-my cameras.

The spot where nine-year-old Ryszard Pajewski sat atop a pile of rubble in 1939 is now a smooth lawn. But a friend saw my picture of this scene and told Pajewski. He came to see me. The rubble pile had been near his home, and he had taken time out from a search for food, for his mother and brother, to rest. His father was later taken away by the Nazis, and he never returned. Pajewski, who is divorced, now lives alone outside Warsaw. 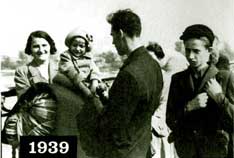 One of the people who found a familiar face in the pages of the Express was Janina Motyka, the pretty 23-year-old wife of a Polish jet pilot. Janina was almost positive the woman shown crossing the Poniatowski Bridge over the Vistula with a small child was her mother. Later, her mother, Mrs. Waclawa Ladziak, confirmed this. The small child she was holding in the picture was Janina, and the boy on the right was her son. Mrs. Ladziak recalled that her husband had been a member of the Polish Army that retreated to Rumania a week before, and that she was attempting to take the family out of Warsaw with the few articles of clothing they could carry. Her husband rejoined his family after eight years in exile in London. I asked her, „Do you remember seeing me or the bridge?” „Of course,” she said with a smile. „You told Janina, who was crying, ‚Don’t cry. If you do, all the children of Warsaw will cry.”‚Janina and her husband invited me to dinner, along with her parents. During the evening, she introduced me to the newest member of the family, her three-year-old son. I could not help remembering that she herself was this age when photographed her with her mother.

Response to the Express campaign continue to grow with each new batch of pictures that we published. Some people remembered a street or building; others saw someone they knew. Their letters to me were sincere and often moving. 0ne said: „I wasn’t photographed by you, but perhaps we met in the besieged town. Perhaps at some time during one of the raids, you took shelter our house on Kruczej Street. How different a our lots! For some, it is better; for others, worse, But only you, of the few foreigners present, experienced everything with us, and you can truly, understand why we don’t want war and how dear to us is peace.”