As we flew into Poland in early July of 1988, Russian planes escorted our LOT flight through

an air corridor into Warsaw. Poland was still under martial law and this monitoring was the first sign of that condition. The Berlin Wall would not come down until November l989.

We were on our way to Krakow to attend the Jagiellonian University’s Summer Program of Polish Language and Culture and would be living in a student dormitory for four weeks. Several classes were to be conducted in English and would include lectures on Polish history, literature and Polish Jewish relations in addition to the Polish language classes. People with Polish roots, from several countries came to renew and discover their heritage in Krakow.

Signs of control were evident in the city. Soldiers were on the streets and riding the trams. Travel outside the country was limited; yet Poles crowded outside the American consulate in hope of gaining a visa. People waited in line to buy food at grocery stores and stood in line with containers to fill at safe water sources. Since food was scarce and because store shelves were nearly empty; it was forbidden to photograph a grocery’s interior. The air was dirtied from the unfiltered steel works in nearby Nova Huta and one needed to brush the soot from arms and clothes with frequency. Children de-veloped serious respiratory diseases from the polluted air and buildings showed the results of pollution with deteriorating exteriors. Communication was limited, outdated and unreliable. Mikhail Gorbachev visited Krakow that July escorted by the „blue police”. 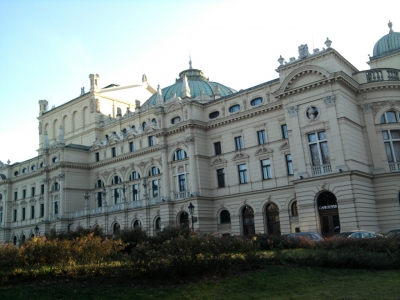 In those days, breakfast and supper at the university were often the same, consisting of bread, ham, tomatoes and cucumbers. Those students with family in Poland would gather the leftover ham from the plates, wrap it, and take the meat to their relatives as Polish ham was exported to Russia. They would also take coffee beans to the relatives as they were used in barter or for special favors. Some Polish people took their vacation during the summer so that they could use their cars to drive foreigners to visit relatives living in the country. The charge was around $50.00 a day at a time when that amount of money was equal to a month’s pay. Times were tough; life in Poland was hard.

Life was also extremely difficult under the Nazi invasion of Sept. 1, l939, followed by five years of occupation in the early 1940’s. Millions of people suffered and lost their lives in work camps and in concentration camps in Poland. Hans Frank, the Nazi governor general of Poland, used Krakow’s Wawel Castle as his headquarters. It is considered a miracle that the architecture of Krakow’s old town square which includes the Cloth Hall, Town Hall Tower and St. Mary’s church along with other Romanesque, Gothic, Renaissance and Baroque structures throughout the city were not demolished under the Nazi regime.

The Market square in old town Krakow is a short walk from the Wawel Castle. The 200 x 200 meter square is one of the largest in Europe and has been a place of trade for centuries being located inside medieval city walls on an old trade route. The Renaissance Cloth Hall with it many arches along with St. Mary’s Gothic architecture and two towers dominate the Rynek Glowny.

In the days under the Communists the square provided one with a brisk walk from one side to the other; the locals stepping through and around flocks of pigeons, and speaking closely to each other in low, hushed tones. Like the pigeons, people wore variations of gray and black or varying shades of brown. Except for the merchandize in the Cloth Hall, (if one could afford it), there was little to detain anyone and the square was like its colors, dull, dark and somber.

Today the Rynek Glowny is alive! Changes began to take place soon after the Berlin Wall came down. Little by little, like a garden of color beginning to flower, outdoor cafes with large red and white umbrellas shading wicker tables and chairs appeaared on the edges of the square. Muscians in regional costumes playing folk music added delightful sound to new brighter colors. Flower stalls mushroomed in specific areas and small souvenier stands with inexpensive items such as leather necklaces and amber beads hang from hooks over painted wooden boxes, carved eagles and nesting dolls. A vendor of cotton candy sells his sticky, fluffy cones to children. A small postoffice kiosk has stamps for sale making it handy for the tourist to send a Krakow card to someone back home. Around the edge of the square, drivers, their horses and carriages wait for tourists to purchase a tour. The young on skateboards and bicycles skirt the edges adding additional color and sound to the atmosphere.

Tourists and Krakowians alike enter St. Mary’s main doors to pray, while those wanting to see Veit Stoss’s magnificently carved 15th century main altar use the side entrance on St. Mary’s Square. Concerts are held at St. Mary’s regularly in the early evening.

Near the 1000 year old St. Adalbert’s Church is the Town Hall Tower and next to it a crew is setting up a stage for an evening folk dance performance expecting to attract as large an assembly that watched an Ukrainian circus performance a few nights ago. Later in the week there will be a street theater performance with giant flies and dragons.

On the opposite side of the square a group of highlanders from the Zakopane area have assembled a temporary home and have items from the mountainous south of Poland for sale. Plump sausages piled high on platters, stacks of salty smokey cheese, country bread thick with crust, rows of pottery and framed works of painting on glass are displayed for purchase. Men, women and children in the costumes of the mountain region handle the sales.

Through the arches of the Cloth Hall there are roughly sixty to seventy stalls where items are displayed for sale. Each merchant is licensed to insure quality of product. Here one will find Polish crystal, embroidered blouses, linen, wooden plates, leather goods, figure carvings, religious items, wooden eggs of many sizes and design, silver jewelry, white, brown and green amber with every shade inbetween; some with bug life preserved,and some without. Shoppers jostle one another in various languages to view the necklaces, pendants, pins and earrings attractively arranged in glass display cases. It is prudent to shop early morning or later in the evening to avoid the crush of crowds. The Cloth Hall is a „shoppers’ paradise”.

Sitting at a sidewalk cafe, enjoying a frothy cappuccino and nibbling at a slice of cheesecake served by smartly dressed , courteous waitresses, it seems incredulous that a dozen years ago Poland was on the edge of becoming a third world country. Gone are the soldiers, and the long lines of people waiting for food and water. Now, safe bottled water is available everywhere and food is fresh and abundant. The air is cleaner and deteriorating buildings are being slowly restored to bring their exteriors to their original condition. Music, theater and art flourish drawing large audiences.

With ATMs conveniently located, internet cafes and cell phones used for immediate communication,one can only marvel at the freedom and independence that has resurfaced after fifty years of oppression. The transformation of Krakow’s Rynek Glowny just may reflect the indomitable spirit, steadfastness and energy of the Polish people in this new and resurrected Poland.